A study in contrasts

My competition dog Jackaroo is a weird little dog. He absolutely loves running agility and all I have to do is say “Hey Jack, wanna jump, jump, jump?” and he is bouncing off the walls ready to go. I have had people stop me at show and tell me how much they love to watch him because he give himself over totally to the moment. I do love that about him despite the fact that’s what keeps outr qualifying rate low. But he is fun to run. Here is a short sequence in our training room so he is pretty under control.

When he is not running agility he is a TV watching couch potato. I am always amazed at how he actually watches TV. I have had people tell me dogs really can’t see what’s on TV but tell me what you think after seeing this picture. 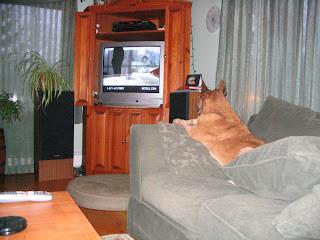 Do you think he is watching? He even has his favorite shows and commercials. Any commercial with a dog or cat or even just the music of that commercial, will bring him flying into the livingroom to watch. If its truly stimulating he will leap at the TV barking maniacally.
Why, you may ask, would a dog trainer let her dog do this? Well I guess I get a kick out of it and Jack loves TV. He works hard for me so I let him fudge this somewhat “bad” behavior. Just in case you’re not convinced he’s actually 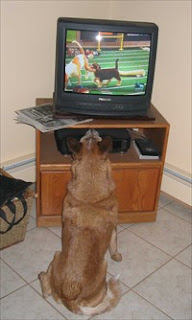 watching:
This was animal Planet’s Pupper Bowl last year on during the super bowl. I kinda wish I’d watched this last Sunday instead of the real super Bowl.
NO I AM NOT OVER IT YET!

6 thoughts on “A study in contrasts”