Years ago one of my favorite uncles told me I had gone to the dogs and its really true. Besides God and my husband Scott, my dog children are the most important part of my life. We were not blessed with human children but God has entrusted us with rambunctious, loving, interesting, unpredictable, amazing dog children. And…we love it. In fact I have t

ranslated this love into my business being I am a dog trainer.
Today as we start 2008, I will introduce the dogs starting with our oldest and alpha dog Tasha. 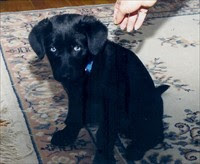 the first place. Here she is at 9 weeks when we first brought her home. Doesn’t she look sweet? She is a Black Lab/Husky cross. Basically her 8 month old husky mom went into her first heat and no one knew but the black lab next door. He visited, left his calling card and went his way again, probably bragging to his lab buddies about his conquest.
When the family who owned Tasha’s mom realized what had occurred, it was too late to do anything but accept the situation. This resulted in only 3 pups, Tasha being the only who was all black and well, you can see her eerie blue eyes. I swear to you I can feel those eyes looking at me.
Tasha was a hellion of the first order. We already had two very nice older dogs, Zeus and Cassidy who were 12 and 11 respectively, when this maniac came to live with us. I had always trained our dogs at home using the old collar jerk into a sit and mash your dog to the floor to teach a down, technique. This pretty much ensured your dog would do what you wanted simply to keep from being man-handled, but was the technique of the day. Tasha decided this was not the method she would respond to so I decided to get professional help and enrolled her in Dog Training School. Make no mistake, this training is for people not dogs, though the dogs benefit because their owners learn not to be so stupid anymore.
Tasha was a wonderful student, even though they slapped a pinch collar on her immediately. Thank goodness that school had started to move to lure and reward with food training and Tasha immediately got on board with that technique. Eventually we moved to clicker training and that just accelerated her training. I would have probably done obedience competition with her had I not been introduced to agility training. Once I saw agility it started the whole cascade effect that indeed sent me and my husband to the dogs!

Tasha was a talented agility dog though not terribly high-drive, still we enjoyed 8 years of competition and accomplished far more that I thought we ever would. When Tasha retired in July of 2006 she had achieved her USDAA (United Dog Agility Association) Advanced Agility Dog title and competed in the Master level until she was 9 years old when I moved her to Performance III Agility. At this level she no longer had to perform spread jumps and the old girl had more time to run a course. During her career Tasha qualified for the Dog Master Agility Team Championship 4 times! We even traveled to the National Competition in MD one year.
Because of Tasha my career as a dog trainer was born. I got hooked on agility and eventually was asked to become an instructor at the dog training school where I took classes. Four years ago two other trainers and I started our own training facility so now I show others how to train their dogs. I often marvel that I can do this for a living. I play with dogs all day and get paid for it. What a country!
Tomorrow I’ll Introduce our second oldest dog Tyler. Until then have a great day and Happy New Year!

One thought on “Intro the dogs”