Tyler is our second oldest dog and our only laid back child. He was about 12 weeks old when we got him and he was the sweetest little puppy from the first moment we picked him at Northeast Animal Shelter. We had no idea what breed he was but a few years ago an AKC representative informed us he is a Norwegian Buhund. We didn’t really care but its kind of cool to have a buhund since they are not well known. He has even been in dogworld magazine in an issue about rare-breeds. Pretty good for a shelter hound!

We introduced Tyler to Tasha at the shelter and she loved him on sight so we knew he would fit in the family. Much to our dismay, the day after we brought him home

he got sick. His fever was off the charts and he was not able to keep any food down at all. We spent the next week giving him anti-vomit shots, IV’s to keep him hydrated and I had to force feed him. After several vet visits and an ultra-sound it was determined he had some heavy duty viral infection, probably Parvo or Corona, and he would not live. We were heart broken, especially as we had lost our 2 old dogs just 2 months before. We went to bed each night expecting Tyler would be gone the next morning. I prayed over him daily as we watched him deteriorate. And then, unbelievably after 4 days he started to improve, his fever broke and he began eating. He was pretty leery of me since everytime he’d seen me the past week, I’d done something horrible to him. I had either given him a shot, stuck an IV needle in him or a themometer up his wahzoo. He didn’t even like the look of me and hid behind Scott for a whole day! But he quickly gained strength and weight and has been fine with the exception of a bit of a sensitive tummy from time to time. He even forgave me after a few days.
Because Tyler is so calm and loving he is the favorite amoung many of our friends and families. My mother especially loves him and when she visits Tyler mainly sits in the kitchen near the cookie jar knowing she can’t resist slipping him a cookie whenever she passes the room. He has always been good at working a room too. He learned to shake hands when he was a pup and found it endears him to many people and they always give him a treat. He is important to my work too since he is non-reactive and so is my diversion dog when working with clients who have dogs with behavior problems.
But, Tyler is Scott’s dog and they’ve had a special bond from that first day they saw each other at the shelter. To Tyler, Scott is the sun and the moon and nothing else matters next to his dad, well cookies are a close second. Tyler was to just be Scott’s pet dog, that is until Scott got bitten by the agility bug. The first year I competed with Tasha, Scott took care of us. He fetched us (sorry for the pun) water, breakfast and lunch and brought Tasha’s treats to the ring after her runs. He made sure we had everthing we needed all day, and took care of me when I was nervous. He relentlessly cheered me on and encouraged me when I got discouraged. He was great too, my friends and I called him the cabana boy. But he slowly came around to wanting to try his hand at the sport too.
Scott started to take Tyler to agility class quickly fell in love with it. He was an awesome handler from the first but we reall 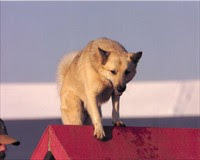 y should have asked Tyler if HE wanted to compete in agility. He was stellar at class and progressed quickly. He was a good jumper and though he wasn’t the fastest dog we had ever seen he certainly ran at a respectable pace. So, the next spring Scott eagerly entered Tyler in his first agility trial. Filled with expectation and excitment they went into the ring the first time. We all held our breath and waited for their first run. Well, we were shocked when Scott removed Tyler’s leash and he bolted out of the ring. This continued pretty much that whole summer of competition. They had a few promising moments but Tyler was not able to finish a course. It was very vexing because he seemed to love the sport and being with his dad, but was so stressed at the competitions. Vexing also because Scott is a very good handler and we had expected them to earn titles at a good clip! 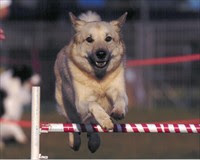 Finally in September that year Tyler finished his first full course and placed 6th. He didn’t qualify but he finished the course and got a standing ovation. By this time Tyler and Scott had a following, (because if I may say so, my husband is a wonderful guy and Tyler is a real sweetie!) so many fellow competitors had been encouraging and cheering them on for all those months. Scott and Tyler have had many successes, they earned Tyler’s Agility Dog Title in USDAA and Preferred Novice Agility and Preferred Novice Jumpers with Weaves Titles.
Now Scott mainly competes with Beta, his little blue cattle dog, but he and 10 year old Tyler still run several times a season. His antics in the ring keep us all entertained and he truly loves to make the rounds at the competitions to visit all his human and dog friends. tyler accompanies me on thursdays when I teach my agility classes and looks forward to seeing all his friends, they all have a treat and a pat for him. His favorite friend is his auntie Sheila who feeds him a pound of dog biscuits every week. WE are so glad our little buhund survived, he is well loved by us, our family and friends.

One thought on “Meet Tyler”