Its been an interesting week. Between Wednesday and Thursday I have had all 5 dogs at the vet office. this is the scene I awoke to this morning. No mistake that I included the coffee pot. 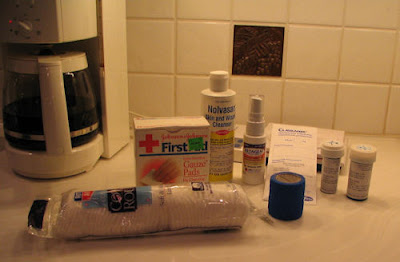 Jackaroo is the only one who has not had to have a procedure or end up on antibiotics. I only had him tested for Lyme disease as he usually gets it once a summer and I have pulled boo coo ticks off him this year.
Blessedly he tested below treatment levels. Tasha was not so lucky and starts a round of antibiotics today. She already was treated back in March but her levels are still high. I hate those pesky little ticks. Can someone explain their usefulness on earth please. I mean do they serve any function other than being a royal pain in tush? Harrumph!

Kindle the baby has a lingering bladder infection, wrecking havoc with house training and yes folks round worms. Oh yuk! I have never had a puppy with worms before so this really grossed me out and of course led to worming all 5 dogs and we will do that again on 8/21.

Beta has a hot spot on her tail she will not leave alone and so had to have her little tail partly shaved and its slightly infected so she is on antibiotics. Her lovely little tail now looks like this: 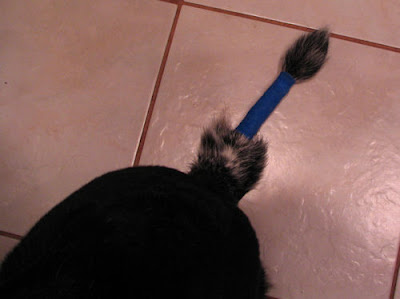 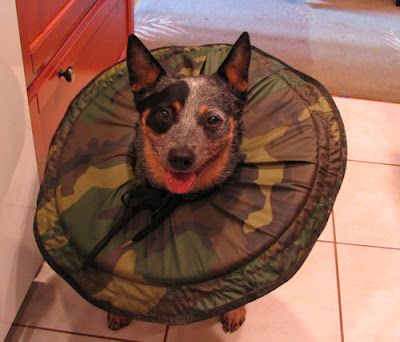 She hates this collar even though I told her camo is all the rage right now. I have threatened her with a traditional Elizabethan collar because she got out of this one already. She is a notorious escape artist when it comes to this stuff. Twice a day she has to be cleaned and re-bandaged. Big fun, trust me.

Tyler had a cyst sort of thing that had to be removed. I was afraid it was a melanoma so I am really thanking God! it was nothing. He is fine now and does not need further treatment, well except for the worming. My vet who is wonderful by the way, is a little richer and we a little poorer and I feel like we are a doggie hospital. Its all been a little challenging but I know it could have been worse. I came home yesterday and finally applied for doggie health insurance. They will probably laugh at us.

OK, I’m going to have a cup of coffee. Have a great day all.